Our MegaBuild Star of the month!

Elfrieda Beukes is known as the ‘Mother Teresa’ of Groot Aub, but, before we get there, let’s talk about her service to the company. Employed as a cashier in 1992, Elfrieda says her two greatest challenges were getting to know the range of products and learning to work a computer. But, with sheer will, determination and grit, she has managed to work her way up all the way to 2019 where she is now in sales at our contractors’ department. Training in sales and customer service, Elfrieda says, opened many doors for her.

“Things were not always easy but I held fast onto the values my parents taught me.”

Elfrieda has committed herself to the youth of Groot Aub where she lives and sees the daily struggles of the residents. After having a daughter of her own in 2005, she began in earnest to apply herself to help. From small beginnings she began to donate her child’s used items, including clothing and blankets, to young mothers in need, as well as to the clinic in the village. Following an incident where three children were run over by a vehicle after leaving school, in true Elfrieda style, she jumped in and took action.

The primary school, being too small to cater for all the children, ran classes in the morning and again the afternoon to teach all the children that needed to be taught. Elfrieda approached Meryl Barry of the Pupkewitz Foundation for help. The rest they say is history – the school was extended to accommodate all the children in one session, in the mornings. Elfrieda still does her charity work and if you want to get involved, contact the Groot Aub Primary School or the clinic.

Melanie is our product file clerk in our procurement department for MegaBuild in Windhoek. This is one goal-oriented, career-driven woman. A keen reader, she has developed quite the knowledge base and this has allowed her to become a leader in her own right.

“I learned about the CATS programme in grade 12. I became interested in the programme immediately, especially since it offered a dual education system, which meant receiving on-the-job training while studying towards my qualification. I always wanted to work in the procurement department, and I was fortunate enough to be granted this exciting opportunity.”

CATS trainees don’t have it easy and Melanie says it taught her to balance her school and work life.

“I overcame this by prioritising and managing my time well. These are essential skills, especially in a fast-paced and deadline-driven environment, like the Pupkewitz Group. My greatest achievement during the programme, amongst many, is graduating third in my class. This would not have been possible without the support and assistance from my colleagues at Pupkewitz MegaBuild who took the time to teach, train and advise me.”

Melanie is targeting the position of procurement manager and with her drive and commitment to everything she does, we have no doubt she will achieve this dream, sooner rather than later.

“I would advise young aspiring professionals out there to take that leap of faith and diversify their skills. I challenge my fellow Namibian youth to think outside the box, explore all available options and truly work hard in discovering their niche.” 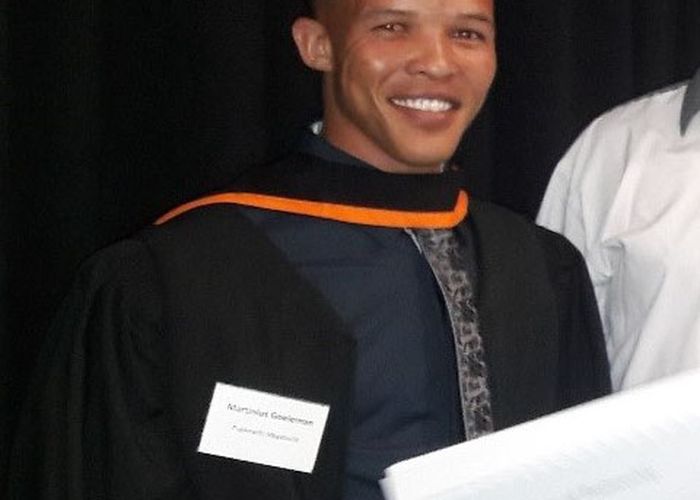 The trials and tribulations of our yard manager at our Outjo branch have certainly moulded him into the determined man he is today.

“I grew up in Aroab in the south of our beautiful Namibia. Growing up in a household with three older brothers was not easy and although we did not have much, we were fortunate enough to be raised by both parents. I recall a time during grade 10 when I lived 10 kilometres away from school and I had to wake up at 03h00 in the morning in order to be at school on time. Looking back now, this and many other struggles I have faced, have only motivated and encouraged me to push through all obstacles I faced, and will face, in life.

Martinus is a firm believer that there is always light at the end of the tunnel but, adds that hard work always pays off.

In 2014, he was a Commercial Advancement Training Scheme (CATS) programme trainee and this is when he joined MegaBuild, graduating in 2016.

CATS is great, Martinus says, because, “it is one of the best opportunities for Namibian youth to get exposed to the working environment as it offers a dual vocational training, allows trainees to attend classes at accredited training institutions and receive on-the-job training, all at once!”

Martinus has climbed through the ranks by attending courses offered by the Pupkewitz Group. Success is certainly written in his stars because his goal of becoming a supervisor within five years of joining the company was achieved in two!

Because learning and growth are essential to who Martinus is, he partakes in many programmes offered by the company.

“I am proud to be part of the Pupkewitz Group. This is truly one of the best companies to work for as it offers enough room for growth by continuously developing staff through various trainings and development initiatives.” Carlos, our buyer at MegaBuild in Rundu has been with the company since November 2008. In his own words, it was a humble beginning: “I was a salesperson with 10% hardware material understanding and 0% product knowledge. I embraced this position and saw it as an opportunity to challenge and show my ability to learn.”

Getting through what he describes as a gritty three-month probation, by 2012, Carlos was promoted to buyer/salesperson.

“The Pupkewitz Group has offered me a life-changing experience which I am thankful to be part of. I am confident that this is only the beginning of brighter opportunities. The harder we work together, the better we make of ourselves and the image of the Pupkewitz Group - teamwork makes the dream work!

Carlos took part in the Pupkewitz Management Programme and describes it as an “amazing experience”.

“This was an amazing opportunity that was granted to experience what the world of leadership has to offer. The programme has touched and changed certain areas of my life. I can proudly say I have become a much better person with a different type of understanding and a better way of doing things. I will always apply what I`ve learnt.”

In his view, the programme shows the company’s commitment to investing into its people, not only to benefit the bottom line, but also for each individual’s personal benefit.

Reduce Your Carbon Footprint with Lighting

Working Together with Pupkewitz Foundation

Reduce Your Carbon Footprint with Paint

Pupkewitz Megabuild and Builders Warehouse offer its clients professional services via its 17 branches across the country. The company stocks more than 20 000 line items, supplying from foundation to roof.